My armpits smell.  I’m wearing a sweaty Koh Rong pub crawl tank top right now, and my blue Nike athletic shorts.  We’ve made it only 30 kilometers out of Hanoi–I normally drive further than that to get IN-N-OUT Burger.  Technically, we’re still in the Hanoi metro.  After such a long and arduous journey we decided to take a day to explore this obscure but pleasant city.  We wanted to see what lay beyond the moat.

We got out of bed around 12.00 and got some Pho Bo at a local shop across from this mysterious fortification ringed by a beautiful moat–It looked so green and beautiful.  We had to do some digging to find out what it was–page 2 on Google kind of digging.  We found out that the mysterious area from yesterday is an ancient citadel and military fortification from the 19th century.  It was built to protect the Western route to Hanoi.  The Kings of the Nguyen Dynasty lived inside.  We had to explore further.

The pho was half decent, broth could use some flavor–5/10.  We walked across the moat and checked out the citadel.  There’s a nice cool path along the moat outside this tall ancient wall.  I ditched the boys to continue down a trail in the woods through an overgrown gate inside the grounds.  After gallivanting through the woods, I emerged into the main square of the fortress.  I saw some of the tallest trees I’ve seen outside of Angkor Wat.

I ran into the boys by some old aircraft on display–random.  They had two Vietnam War era MIG-22s and a MI-9 helicopter.  It was cool, they were real jets, not models.  A first for me to feel and see a real fighter jet that’s seen some action.  The plaque bragged about how many U.S. fighter jets the MIG-22 shot down.

The grounds itself are impressive.  A beautiful tall flag-tower, nice gardens, and the citadel of course.  We went into the citadel, and it was pretty nice and had a shrine of course, and some photos of what it looked like in the early 1800s when it was built.  We got our fill of the place after a couple hours and went to go tune up our bikes.

We all got a lot of work done.  I got a carb cleaning, intake changed, new spark plug, and new front brakes for 1 million dong.   While waiting for them to work on our bikes, we drank tea with a 61 year old Vietnamese man and the whole family living in the shop.  We used a pen and paper to try to communicate with him and pass the time.

After we finally got out of there I drag raced Andreas and David twice and left them in the dust!  My bike is running significantly better than before, a night and day difference.  Andreas got a little ripped off, he had to pay 5 million dong.  He got charged about 3 million dong for a dirtbike tire they put on the back.  He didn’t ask how much it cost ahead of time.  Later on Kevin went back with him to sort this all out and they got a million back in inflated labor costs.

We had a beautiful seafood hotpot for dinner at the hotel.  An amazing assortment of seafood consisting of sprott prawns, squid, beef, clams, and some local fish.  Total cost was 400,000 between two people–about $7.50 a person for what would cost $80 in Canada.  Now we’re going to just relax and watch a movie. 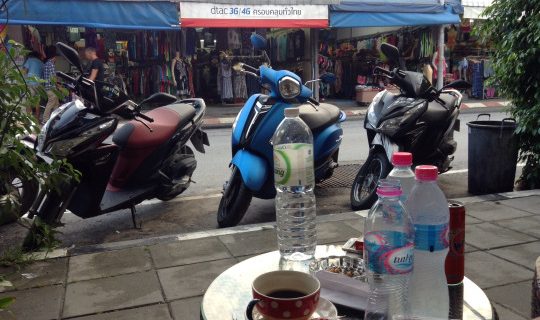 Ko Samui and catching up