Cody cracked his phone last night.  He’s been carrying it in his backpocket ever since he almost got robbed last week in Koh Samui.  A prostitute ran up to him while he was walking home alone in the dark and tried to rob him–shoving her hands in his front pockets, trying to steal everything out of them.  Through a drunken fluke, he had his stuff in the back pockets–leaving the robber empty-handed.  From there on out he has been a back-pocket only kind of guy.  That is, until he sat on his phone–cracking the touchscreen and rendering his cell-phone useless.

We just started drinking after the last journal article left off.  At 21.30 I had a Skype interview with Remote Year, which I took from my dorm bed.  I drank a beer and wore the “Works for Jerks” shirt during the interview.  I was taking things casually, to say the least.  My interviewer turns out to be a twenty-something cool looking girl from the USA–she looks like someone I would probably hang out with.

So from the comfort of my dorm bed I tell her that I was in Koh Phi Phi right now, and she immediately follows up with “You’re on the the wrong island!”. Cheeky, I didn’t expect that.  She must be a traveler–I wondered what her spirit island was.  Koh Tao?  Koh Phangan?  Could it really even be Koh Lanta?  Please don’t tell me Koh Chang.  It turned out to be Koh Tao, a really good choice.  It really is the coolest island–and perhaps the coolest place I’ve been in South-East Asia.  It turns out that she used to be a Divemaster at Roctopus for several years.  I’ve never dived with them, but all their alumni students seem to wear that Roctopus wristband for life.  They all speak quite highly of it.

So after a pretty interesting interview that left me somewhat un-sold on the value of the very expensive program, I headed back out to the porch.  Everyone was still out there boozin’, so we kept drinking until about 11 PM and then we hit the beach.  Caro(lina) from Montevideo, Uruguay came out with us.  She was the girl whose bed I jumped into earlier.  Her and I drank some Blend 285 and Red Bull.

And so the impromptu beach crawl crew formed, and I went out with Caro, Cody, Aly, Rich, Kimbo, Andreas, plus Jane and Francine from Germany.

We were at Ibiza Bar, and Caro found Argentinian guys on the beach dance-floor to chat with.  They were talking excitedly about something, and after a minute or so she was like “Psst!  Come over here, we have something for you”.  I walk over, intrigued.  They present me their bucket, in that way you make the straws available and pointed towards the recipient.  I closed my eyes and took a sip.  As the cold liquid entered my mouth, I recognized that sweet nectar. Fernet Branca.  Holy shit, what an unusual treat.  It’s absolutely impossible to find in SE Asia.

So, it turns out that they mix Fernet with Coca-Cola in South America–Only in San Francisco do you order shots of it.  I was trying to explain that we drank it straight, but they all thought I was insane.  The mixture of Coca-Cola and Fernet is really quite delicious.  I grew a little sad that I probably wouldn’t taste this again until I returned to the Western world.

So we drink, dance, I fire rope again.  I make the instagram account @catsofkohphiphi, and take some photos of of the myriad cats in Phi Phi.  Jane tried to feed this little kitten a can of tuna, but it just sniffed the tuna trepidatiously and then walked off.  Rejected by a kitten.

Cody, Jane, Cora, Francine, Kimbo, and I tire of dancing, and go the “the spot”. It’s down the beach all the way to the end of the shore, and then up a lot of steps to this treehouse bar under construction.  The security guard there either is blind or doesn’t give a shit.  It’s a 3 story bar made out of wood on the side of a hill, in the tree canopy.  These bars are increasingly popular in SE Asia for the beautiful view they provide.  The spot is all the way at the top, with a giant tree sticking up through the middle of the floor.

So it’s 3.15 am at this point, and I’m laying down on this almost complete construction site, staring out at the view provided of the whole beach.  You can see all the way down to the other side of the beach–from coast to coast.  It’s kind of like Serenity Bar in Koh Tao.

We all just chat a bit about life, watching looking at the moon-lit water and the lights of the party beach.  After an hour or two we get bored, and then head back to Alena to retire to bed. By the time I return to Phi Phi, this will be some over-priced resort bar.

Oh yeah, we found some drunk guy passed out on a stoop next to the hostel. 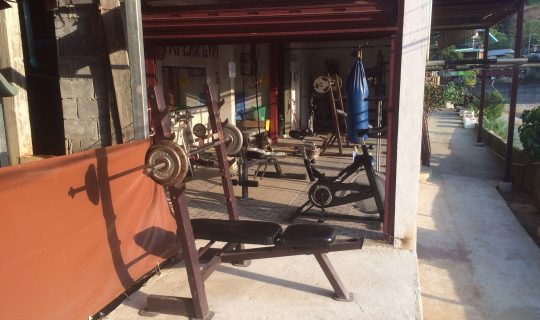