“Meet in the big gym at 7:00, the race will start at 7:30”  read the e-mail. Today was the day. McMurdo Station (USA) was competing against Scott Base (New Zealand) in the annual manhauling competition. What’s manhauling? Well it’s like dog-sled racing, but instead of dogs you have humans. Our race route is from McMurdo Station to Scott Base overtop of the Ross Sea Ice. The distance is about three miles.

I got off work around 1730, as per usual. I went down to the galley to get some chow before the competition. It was going to be a three mile slog with me and three others pulling a sled with a passenger and survival bag, a total weight of about 400 pounds. Need some sustenance for this. I see Velcro Vinnie and some of the boys sitting down at one of the usual tables in the galley, waltzing over there with my tray. I’ve got a heftier than usual plate complete with pork, potatoes, some shitty frozen veggies, and meatballs. I take a huge slice of bread– I need energy for this race.

We have a little bit of chit chat around the table, having a few laughs with the usual characters. Vinnie and I are pulling the same sled, and we’re an hour out now from race time. I’m still hungry and feel like loading up on calories. I grab a piece of pizza, and then a brownie with some peanut butter pie for dessert. It was amazing, and I didn’t even feel bad about it. I eat just enough food to feel full without getting the itis or feeling like I’ll have a brick in my stomach–there’s an art to this you know.

A few more jokes and I leave the table. I walk down Highway One–the central hallway in the galley building–and stop by the closet that has all of the Yaktrax and foot warmers. I grab some Yaktrax and head upstairs to my dorm room to get ready. Throw on some Nike tights and merino wool long-johns over top. Underarmor wicking shirt, red toque. I pull my Snoop Dogg socks up over my long-johns and pull those Yaktrax over my shoes…let’s do this.

It’s ten to, and I almost forget to grab my GoPro as I head out the door. I run into Johnny on the way over, and we walk down the hill to the big gym. He’s got his camera and he’s ready to document this event. I walk into the big gym to find a scene of chaos and confusion. Lots of people struggling with harnesses and stuff, and soon enough I’m one of them. These harnesses are just climbing harnesses we wear backwards over our chest. I find Coach Kirstin and she’s running around. Whatever, I ask one of of the girls to tighten up my harness and then clip four carabiners together to keep the harness tight around my chest.

Time to race. We all head outside and down to the sea ice, where five sleds are waiting for us. There’s three mens teams and two girls teams. We all line up 100 yards behind the sleds and wait for the ready, set, go! And we’re off. It’s a mad dash up to the sled, and then we stop and clip each other in. After a little fumbling we’re clipped in and running. 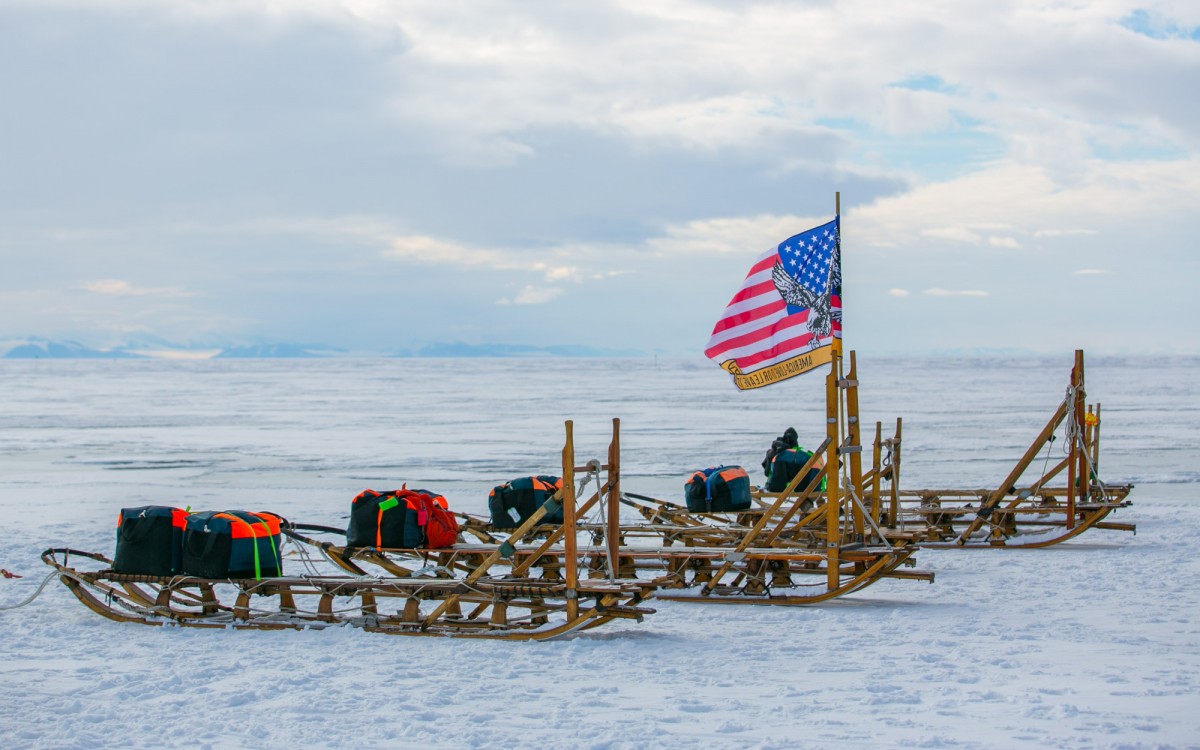 There’s four of us running. It’s me, Bernie the 40 year old British punk rocker who works in cargo, Velcro Vinnie the machinist from Kansas, and Kevin the Floridian who work in TELCO. It’s a bit of a slog. We find a tough but not completely exhausting pace and we keep the man-sled going. The first sled of Americans is pulling ahead of us. “Think we can catch up with them?” “Yeah let’s try it”. Our efforts are in vain, we get a little bit of a lead, but no bueno. Those marathon runners are fast–they won last year. No worries, we’re both American teams in the lead.

“Kick it!” yells Bernie. “Punch It!” I yell after. We’re both at the front of the pack, leading the charge. Those other dudes upfront are way up there, but we’re more worried about the Kiwis that are tailing us. From time to time Zeke–our passenger–says “they’re closing that gap!” That’s when Bernie yells “Kick it” or I yell “Punch it!” and we start a burst of running faster. This serves us pretty well.

We come in second, really hitting the gas for the last stretch. I just want to fall over when it’s done. There’s a ton of people waiting at the finish line cheering everyone on. People here are cool like that. We wait for the other teams to cross the finish line, cheering them all on. Everyone finally gets across the line…time for a drink. We keep walking up the sea ice up to Scott Base, soon to be in the bar. I pull open that big freezer door entrance to Scott Base and lead my fellow haulers to the bar.

I enter, finding the place swarming with people. I’m emerged in a swamp of heat and sweat, “The Tatty Flag” bar of Scott Base doubling as a sauna. There’s a massive queue to buy a drink. “Tell them you were manhauling, we’re getting every manhauler a free drink” says one of the event organizers. I order a Scott Base Edition pale ale. The drinks here are way better, and all of the Kiwi companies seems to offer a “Scott Base Edition” of all of their wine and beer.

The air in here is stale–I need some air. I walk out of the bar and into the hallway where the wall is crowded with picture frames showing each years crew at Scott Base. It’s almost like the graduating class photos in high school, but with a bunch of people crazy enough to spend a year here. I join Kevin in analyzing the pictures, enjoying some fresh air. The picture of the winter-over crew from 1994 was dressed so 90s that they looked on-fleek for 2017. I have a few drinks, and buy a bottle of wine for take-away. They have way better wine available in Scott Base for when you get sick of ‘slapping the bag’.

I go back into the bar / sauna and notice that they’ve removed the giant bowls of salted peanuts tonight. Tonight is an ‘American night’ at Scott Base which means anyone can show up. On other days Americans need an invite, and the bar is a nice chill spot–with lots of peanuts. I prefer it like this, and immediately understand now why they only let us come over once a week. Us Americans ruin everything.

I’m in a mood for celebrating. I strike up a lot of conversations, both with people I know, and people I don’t. Suddenly,  it’s 10 PM and the bar is closing. Joel and I walk out of the base, expecting to walk home. Oh good, there’s a shuttle…but it’s full. “Hop in, we’ll make room!” everyone says. So Joel and I jump in the big ol’ red USAP Van, sitting on peoples laps for the 10 minute drive back to McMurdo.

Joel and I walk over to Southern Exposure bar to play a couple games of pool. We wait for some Italians from the Italian Antarctic Program finish up on the table. They were the worst pool players I’ve ever witnessed–they took forever! There was a whole table of Italians on their layover en-route to Mario Zuccatelli Base. I played surprisingly well…my roommates back in SF might have a little more competition when I return.

I’m a little tipsy at this point. I end my night playing bananagrams at the Coffee House.

If I learnt one thing tonight, it’s that my roommates and I back in SF have been playing bananagrams all wrong.